Skip to content
Max-F. Scheichenost entrepreneurship, growth marketing, investing November 22, 2019November 22, 2019 5 Minutes
Most people with interest in Venture Capital and brand building have actively followed the Icarus story of We: Going from a $46b valuation to survival mode. There have been couple of good articles writing about the challenges of todays’ startups – from brand building of artificial unicorns to what’s currently wrong with the start up picture. Or as  Prof Theseira from Singapore University of Social Sciences summarised it so well: “In short, it’s much easier to scale – because all that takes is money – and it’s much harder to build a self-sustaining business model”.

One of the “early” assessments of the current absurdity of valuations came from the legendary Scoot Galloway. He was challenged (and attacked) for his brutal & honest opinion for his first post labelled WeWTF. But fast forward, most of his predictions became reality:

Now, there is a new mantra in Silicon Valley: Make a profit.

This new mantra started to swap over to start up hubs in Europe (with discussions on “path to profitability” at board meetings in Berlin & London) and it is only a matter of time when it arrives in Southeast Asia (SEA). Talking about SEA:

In Southeast Asia there is a race to be an Unicorn. Exemplified by the latest Google/Temasek report that suggests that there are 70 “aspiring” unicorns in SEA: 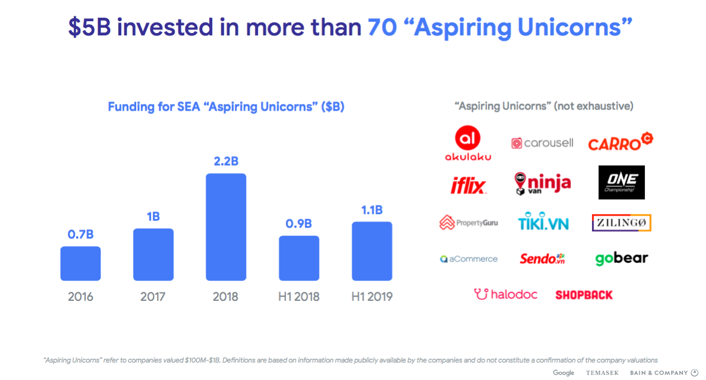 From the outside this looks like great news. But if you deep dive on them there are also some questionable tech companies that have raised significant amount of money based on “aspiring” metrics but not necessarily business fundamentals.
Let’s have a look at one of the players that has enough publicly available information to showcase the absurdness of valuations in Southeast Asia: carousell.
Personally, I like the platform and got some of my best deals (e.g. Triathlon bike or Golf bag) via the platform. In addition, I think the founders have done an excellent job in building the company across multiple markets – and they have done a really good job in fundraising. But I was surprised that they have not implemented a scalable monetisation model (such a small % on each transaction) already years ago. Instead they went for the holy death of any internet company: reach-based ad-model with untargeted display ads. Ouch.
Once you have started this monetisation stream, you kick-start the holy death circle of most startups: First, you need more & more ads to show “growth” in revenue. By doing this you annoy more and more user. Over time, the more (irrelevant) ads you show, the more you annoy user. Which is also the explanation why a good cohort of user is not shopping on carousell anymore (myself included).
The argument that it can be a Facebook-style targeting approach is slightly misleading as Facebook got 100x the engineers to make these ads personal and – even more importantly – they have 100x the data points to profile their user and thus personalise their ads. The reality-test: compare the listings on both platforms with the corresponding ads to judge for yourself.
Getting back to the absurdity of valuations in SEA: carousell recently raised U$42MM at a valuation of U$550MM. But – and this is a big but – it generated only $7MM in revenue with $25MM loss in 2018.
Don’t get me wrong: it is a massive achievement to generate $7MM in revenue. And it is a massive milestone for any entrepreneur that should be celebrated. But a U$550MM valuation on $7MM of revenue and $25MM of loss? So a 78.5x multiple on the revenue of last year? What?!
I understand that the tech scene got a tendency to celebrate itself (myself included) but this is so off in whatever business metric you value it. Obviously, Seed round, Series A and (perhaps) Series B might be raised on vanity metrics (#User, GTV or GMV) but any serious financial investor must do proper due diligence to get to a comparable revenue multiple.
To have a comparison multiple, we can look at ebay (btw: carousell was pitched in one of their first decks as the “eBay for mobile”) so this might be a good reference point. eBay’s current revenue multiple is at 3.1 and its range has been from 0.3 to 5x. This is substantially lower than a 78.5x multiple.
In Venture Capital (as it is in any financial market) it is about demand and supply. So I assume in the above example the company has positioned itself as the only “supply” in the fast growing SEA internet economy (Oh, isn’t there Garena with Shopee?). Anyway, how can you justify a higher than 10x multiple on revenue? Even in emerging markets that are more inefficient than the US or other more developed markets – a higher than 10x revenue multiple must raise all eyebrows. In fact, there should be a risk discount instead of a premium on startups in emerging markets.
On a much smaller scale, I am looking at a handful of investment opportunities per week. Just last weekend, I was doing due diligence on a startup in the Philippines. The founder – a first time entrepreneur – showed me his traction: he generated U$50K in the previous year. His asking: a valuation of $10-20MM. I asked him how he rationalises his valuation. His answer: “I want to raise a lot of money thus I need a higher valuation than my peers”. Ok. I mean even if this company is making $50K/month it would not justify a 15x to 35x multiple on their revenue runrate. This is the level of valuation absurdness we are experiencing in Southeast Asia.
So what are the implications for the tech industry – especially in Southeast Asia:

Personally, I am still heavily invested in tech and will continue to invest in promising early-stage start ups. But I am mindful that a correction will have to take place – even for my existing tech portfolio. As hard as it will feel in the short term, it will help the ecosystem to focus on the right thing in the long-term: building and scaling sustainable or self-sustaining companies. Companies that have a reasonable valuation based on business fundamentals and not as Adam Neumann (now ousted Founder/CEO of We) said in 2017: “Our valuation and size today are much more based on our energy and spirituality than it is on a multiple of revenue.” Amen.

I guess by now we all know how this ended for Adam Neumann and We: A slight correction of the previously $47b valuation or as Business Insider titled it “How WeWork spiraled from a $47 billion valuation to talk of bankruptcy in just 6 weeks“.

Disclaimer: This article is presenting an opinion about the current sentiment in the VC scene in Southeast Asia. This article is partially talking about carousell as an example as there is enough information publicly available for this company. I have a former loose business connection in the sense that I invested in a company (Duriana) which got acquired by carousell back in 2017.

2 thoughts on “The Hard Truth: Re-pricing of Tech Assets in SEA”